Several prominent players in the competitive landscape of upper limb prosthetics market are prioritizing new product launches eyeing the opportunities lying in competitive price ranges. While this strategy is likely to aid companies improve penetration into developing markets, others will also focus on development of convenient accessories to assist the usage of upper limb prosthetics – such as hand gloves.

Transradial disarticulation (below elbow) will remain the key indication generating maximum demand for upper limb prosthetics. The report points to a higher revenue share of over 1/4th of the total value, collectively contributed by wrist disarticulation and transhumeral disarticulation (above elbow). Sale of partial hand has also been registering a moderately growing share in the market revenue.

Prosthetic wrist sales account for over a fourth of the total market value whereas, prosthetic arm is likely to develop highest-selling potential in the years to come. Prosthetic elbow and terminal devices are currently among highly sought-after components of upper limb prosthetics after prosthetic wrist, according to FMI’s study. The combined revenue share of these two in the market has been anticipated to be more than 45% in 2019. However, prosthetic shoulders will also continue to experience moderate demand over the course of next few years. 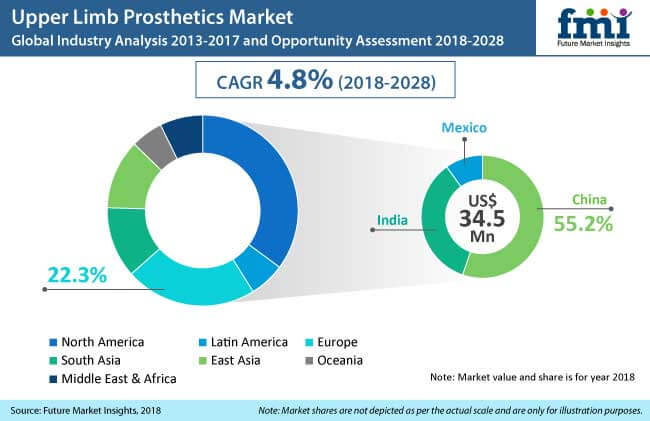 While more than 55% share of the global market revenue is contributed by developed regional markets, the penetration of upper limb prosthetics within most of the developing regions remains in its latency. According to FMI’s study, the market in China, India, and some of the fast-developing economies in East and South Asia economies hints at promising growth prospects post 2019. The report attributes this growth to the sophistication of healthcare infrastructure, improvements in reimbursement scenario, rapid expansion of the patient pool, and the flourishing medical tourism sector.

Increasing per capita healthcare spending, spike in the private and public investments in R&D, and the influx of activities involving shifting of manufacturing bases to developing regional pockets have also been instrumental in establishing a positive growth outlook for upper limb prosthetics market in these regions.